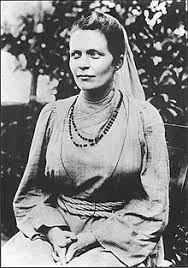 Margaret Elizabeth Noble, later Sister Nivedita, was born in a Scottish-Irish family on October 28, 1867, in North Ireland. Losing her father at the age of ten, her early life was marked by considerable deprivation. She studied at a charity institution, Halifax School and Orphan Home and after completing her schooling, took up a teaching job – a vocation which was becoming quite common among the women in Britain then. She was an innovative teacher, influenced by the New Education Movement that was sweeping the West at the time, the patron-saints of which were the Swiss educationist Johann Heinrich Pestalozzi and his German disciple Friedrich Wilhelm August Froebel, who developed the concept of the kindergarten. Margaret’s life changed after she met Vivekananda in 1895 in England. Inspired to walk in his footsteps, Margaret arrived in India in January 1898 and was given the name ‘Nivedita’ by Vivekananda.

While Nivedita is remembered in various ways, a very important aspect of her life and work in India was her contribution to the reawakening of Indian artistic traditions. Nivedita always had a sharp critical mind on art, developed right from her early days of schooling and later developed in the company of her friend and disciple of Ruskin – Ebenezer Cooke. She had made a deep study in museums across the Europe and visited several ancient sites of India like Sanchi, Bodh-Gaya, Ajanta-Ellora, Udaygiri-Khandagiri, Sarnath etc, making her well-steeped in knowledge of artistic traditions of both India and the Occident. In America she had also delivered lectures on Indian Art. Like Vivekananda, she too strongly rejected the claim that it was Hellenic art that had inspired Indian art and that there were no proper Indian traditions before that. The Swami had discarded this view point in his lecture in the Paris Exposition in 1900.

Through her firsthand study across the country Nivedita began to strongly believe that Indian art needed a reawakening and a ‘going back to its roots’, as it had become divorced from, and unaware of, its own traditions. She observed that in all art schools the training was given through Western approaches. The work of late nineteenth century Indian Masters like Raja Ravi Varma was also largely informed by Western art traditions. Nivedita strongly believed in the potential of art as a vehicle of national awakening. Her ideas also got further boost after extensive interactions with the Japanese art critic Kokazu Okakura, who visited India in 1902. Nivedita also collaborated with Okakura and helped him in writing of his book -‘Ideals of the East’, herself writing its introduction. When she met Ernst Binfield Havell, the Principal of the Government Art School in Calcutta, she found someone who too felt the same about the sovereignty of Indian art traditions, and rejected the idea of that being of derivative nature – a thesis then in currency. She closely interacted with Abanindranath Tagore, nephew of Rabindranath, who was then the Vice-Principal of the Government Art College in Calcutta. Abanindranath began to put into practice the hints Havell and Nivedita gave him and also began to mentor his young students in the same approach. These artists together founded the ‘Indian Society for Oriental Art’ in 1907. The flowering of art which came along through their endeavours was known as the ‘Bengal School’.

Nivedita was a mentor to the young painters of the ‘Bengal School’ like Nandalal Bose, Asit Haldar, Suren Ganguly etc. She arranged for a long assignment for Nandalal and Asit at Ajanta-Ellora of copying the murals in the company of Mrs Herringham, a well-known British artist. She urged them to discover the ‘soul of India’ and express it through their art work. When Nandalal and others wanted to directly participate in the political affairs of the National Movement she dissuaded them and asked to serve the country through their chosen vocation of art. She was close to Anand Coomaraswamy, the highly acclaimed Ceylonese art historian and critic, and the trio of Nivedita, Havell, and Coomaraswamy continuously attacked the idea that Indian art traditions did not exist before the Greek encounter. This trio also played an important role in defining the function of Art Schools in India like those (beside Calcutta) in Madras, Travancore, Lahore, and Bombay which were informed by Western techniques. They declared that the aim of the Art schools in India should be to revitalise the Indian traditions in order to prevent their extinction and also relate the work of Indian craftsmen to the life and thought of Indian people.

Abanindranath remembered an occasion about which had created an indelible impression on her mind.

“I saw her (Nivedita) a second time at a party of the Art Society at Justice Homewood’s house….The whole place was crowded with so many rich people. Many beautiful ladies were there. Nivedita came late in the evening. The same white dress, the rosary of Rudraksha beads round her neck and her brown hair tied in a high knot. When she came and stood there it seemed as if the moon had arisen among the stars. In a moment all the beautiful women paled into insignificance.”

How the artist in him viewed her is clear from this statement, “I do not know whom you would call beautiful; to me she is the ideal.”

Abanindranath had first conceived of an idea of creating ‘Banga-mata’ with his own daughter as inspiration. Nivedita inspired him to view and create it as ‘Bharat Mata’. The painting became a landmark in the days of the nationalist movement. She reviewed the works of the artists of the ‘Bengal School’ in ‘Modern Review’ and wrote extensive notes on them. She published on the art-work of great European masters too like Raphael, Michelangelo, Millet, Rossetti, Titian, Morris, Burne-Jones. She particularly gave the example of Puvis de Chavannes who made significant contribution in giving form to French history and traditions through his work. Nandalal Bose, Abanindranath Tagore, and Asit Haldar did the illustrations for Nivedita’s book ‘Myths and Legends of the Hindus and Buddhists’ which she left incomplete due to her death. Coomaraswamy completed it and it was subsequently published in both their names.

Nandalal Bose, in particular, was deeply moved by Nivedita’s death and generously acknowledged her mentorship :

“The thought of progress of Indian artists always dwelt in her mind. I can never say enough about the encouragement I received from her. When she died it like being deprived of the presence of a guiding angel. It was Sister Nivedita who introduced me to the ideas of Ramakrishna-Vivekananda.”

Nandalal himself pointed out the influence Nivedita had on Havell, and thus by extension of the whole group of artists training under him : “I do not know whether Havell has mentioned the name of Sister Nivedita anywhere in his books; but she made him understand the viewpoints of Indian aesthetics and philosophy of art.”

Dinkar Kowshik, eminent painter and contemporary (indeed the best friend) of Satyajit Ray in the Fine Arts course at Kala Bhavan in Santi Niketan in his biography of Nandalal Bose writes:

“Abanindranath was all praise for her commanding appearance. He was wont to say, that, when Sister Nivedita appeared in any social gathering she looked like Parvati incarnate, the legendary daughter of Mount Himalayas. So pure and so overpowering. The Sister was an able writer and for some years she provided extensive notes and guidance on the paintings that appeared in Modern Review. These writings of critical appreciation helped to raise the level of aesthetic awareness and create a favourable audience for the artist community in general. Nandalal’s meeting with the Sister left on him the impression of her single-minded devotion to a cause. Whenever possible, she would visit the art school and encourage the budding talents there. Nandalal looked forward to her comments and critical observations. He knew that for any young aspiring artist it was essential that his work should be seen, analysed and encouraged. Criticism did not wilt a talent when it had the inner will and urge to flower. Even observing her among them in her sprightly grace was an event for Nandalal. He sometimes referred to the source of his inspiration in creating images like Lima’s Tapasya as being in Nivedita.”

Nivedita firmly believed there was no voice as that of art to reach the people. She was also confident that Indian art will have a rebirth and reach heights unimagined when it finds India itself as a subject. During the 150th anniversary of her birth, it would be fitting to remember the multi-dimensional services she rendered to her adopted country.