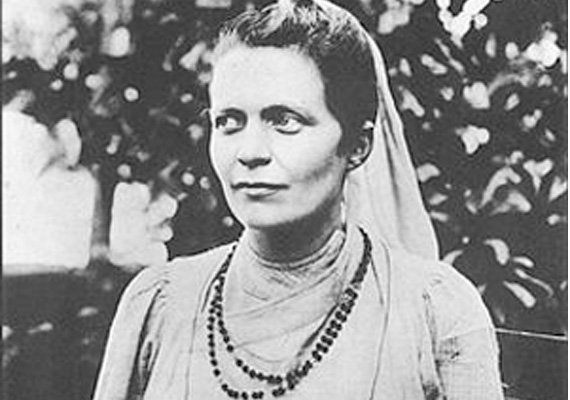 Margaret Elizabeth Noble, later Sister Nivedita, was born in a Scottish-Irish family on October 28, 1867, in North Ireland. Losing her father at the age of ten, her early life was marked by considerable deprivation. She studied at a charity institution, Halifax School and Orphan Home and after completing her schooling, took up a teaching job – a vocation which was becoming quite common among the women in Britain then. She was an innovative teacher, influenced by the New Education Movement that was sweeping the West at the time, the patron-saints of which were the Swiss educationist Johann Pestalozzi and his German disciple Friedrich Froebel, who developed the concept of the kindergarten. Margaret’s life changed after she met Vivekananda in 1895 in England. Inspired to walk in his footsteps, Margaret arrived in India in January 1898 and was given the name ‘Nivedita’ by Vivekananda.

Re-gathering herself after the passing away of the Swami, she began to give shape to the future direction of her work – translating her Master’s ideas of ‘Man-Making into ‘Nation-building’. Throughout the years following 1902 Nivedita was formulating the different bases for Indian nationhood and eloquently expressing them in her writings. She knew this to be her chief task. In 1903 she wrote in a letter:

The whole task now is to give the word ‘nationality’ to India, in all its breadth and meaning. The rest will do itself. India must be obsessed with this great conception…..It means new views of history, of customs, and it means the assimilation of the whole Ramakrishna-Vivekananda idea in religion, the synthesis of all religious ideas. It means a final understanding of the fact that the political process and the economic disaster are only side issues – that the one essential fact is realisation of its own nationality by the Nation.

She relentlessly attacked the idea that it were the British who had united India :

“If India had no unity herself, no unity could have been given to her. The unity which undoubtedly belonged to India was self-born and had its own destiny, its own functions and its own vast powers; it was gift of no one.”

She thoroughly believed that India was a synthesis with great strands of unity. She in fact thought that the British were quick to understand the underlying unity of the country and thus could put it under a common administration.

The Motherland is indeed one, that north and south are inextricably knit together, and that no story of its analysed fragments, racial, lingual, or political, could ever be the story of India…The Indian people may be defective in the methods of mechanical organization, but they have been lacking, as a people, in none of the essentials of organic synthesis. No Indian province has lived unto itself, pursuing its own development, following its own path, going its way unchallenged and alone. On the contrary, the same tides have swept the land from end to end.

For Nivedita what India needed was an education established soundly on the basis of a ‘national consciousness’. To her any effective education had to boost the national self-consciousness, and invoke vigour and responsibility, and that once this was firmly in place, international /  universal dimensions would follow, thus raising it to a new level of perfection.

Nivedita believed that training of the mind and development of power of concentration had been the chief thrust of Hindu education for ages. And therefore, it did not have anything substantial to learn from West towards this. She felt that superiority of the West lay in her realisation of the value of united efforts in any given direction. She referred to this Western trait as ‘organizing of the popular mind.’ It was here she felt India could learn from the West.

According to Nivedita, National Education is first and foremost an education in national idealism with emancipation of sympathy and intellect as its chief aim. For achieving this she wanted the ideals presented before the children and students to be in a form informed by their own past.  “Our own imagination must be first based on our own heroic literature. Our hope must be woven out of our own history. From the known to the unknown must be the motto of every teacher, rule of every lesson.” A true national education in India would awaken people towards a life of sacrifice towards what she referred to as ‘jana-desha-dharma’.

On his return to India, in Madras Swami Vivekananda had said : “For the next fifty years this alone shall be our keynote – this, our great Mother India. Let all other vain gods disappear for the time from our minds. This is the only god that is awake, our own race – everywhere his hands, everywhere his feet, everywhere his ears, he covers everything.” Echoing that Nivedita said:

This desire to serve, the longing to better conditions, to advance our fellows, to lift the whole, is the real religion of the present day. Everything else is doctrine, opinion, theory. Here is the fire of faith and action. Each day should begin with some conscious act of reference to it. A moment of silence, a hymn, a prayer, a salutation.

She hoped minds and hearts will be trained to the service of the jana-desha-dharma, and that will act as the motive-spring of all the struggles. She thought of ‘organised unselfishness’ as the foundation of national feeling.

On the foundation of ‘family ideal’, moving towards the larger ideal of ‘nationality’ is a constant refrain in Nivedita’s writings and wished the countrymen, particularly the youth have a deep cultivation of this ideal. “The centre of gravity must lie for them, outside the family. We must demand from them sacrifices for India, Bhakti for India, learning for India.”

The best preparation for nation-making that a child can receive is to see his elders always eager to consider the general good, rather their own.…We are a nation, where every man is an organ of the whole, when every part of the whole is precious to us, when the family weighs nothing in comparison with the People.

She was at her inspired best giving a call, just like her Master, to her countrymen for pledging their lives for sacrifice for the sake of the nation.

Why should we limit the social motive to a man’s own family, or to his community? Why not alter the focus, till we all stand, aiming each at the good of all-others, and willing, if need be, to sacrifice himself, his family, and even his particular social group, for the good of the whole? The will of the hero is ever an impulse to self-sacrifice…. Shall I leave my family to struggle with poverty, unprovided? Away with the little vision! Shall we not eagerly die, both I and they, to show to the world what the Indian idea of duty may be? May not a single household be glad to starve, in order that a nation’s face may shine? The hero’s choice is made in a flash. To him, the larger vision is closer than the near.

And thus she urged and inspired the countrymen to immerse this little ‘self’ into the Virat of Bharatvarsha:

If the whole of India could agree to give, say, ten minutes every evening, at the oncoming of darkness to thinking a single thought, ‘We are one. Nothing can prevail against us to make us think we are divided. For we are one. We are one and all antagonisms amongst us are illusions’ – the power that would be generated can hardly be measured.

Such an education to Nivedita was the perfect recipe for creating future heroes. She did not think heroes were born; she believed all human beings have an innate longing for self-sacrifice, and that the force of heroic thought impels them in that direction. She thought that the challenge of educating the Indian masses could be best solved by dedicated and inspired educational missionaries coming from within the country. It was her fervent desire to see a band of educational missionaries who would across length and breadth of the country educating the masses. She took the example of many Western countries where young men were required to serve for a few years in the military service and hoped for a similar army of educational missionaries in India. But she believed that best way to do this was by voluntary selflessness of students and youths themselves.

She knew that in the modern times a strong Indian nation needs to have a thoroughly democratized society with careers open to ability for all and that for achieving this education was the key. Her thoughts on equal opportunities and access to education were spelt unambiguously:

The motherland must recognize no caste, for that would prevent her availing herself of the best possible service. For this, the presence of a social formation representing democracy is absolutely necessary. So far from recognizing caste, indeed education must be absolutely democratized, in order that all talents may be discovered, and the remaking of the Swadesh may proceed apace.

The central theme of Sister Nivedita’s mission was to create a strong national consciousness in Indian people. Each Indian should live for the country’s sake and hold oneself as an offering to Mother India was her constant thrust. On her beads she was known to repeat ‘Bharatvarsha’ as the mantra. Steeped in the process of reaching Advaita through rejecting dualities, she urged everyone to imagine India is one – imagining thus she would actually become one. To her India was the great unity all Indian people had to arrive at. In today’s times when people question whether India is or can ever be called a ‘nation’ and point out what they think is their ‘fragmentary nature’, Nivedita’s exhortation to her Indian brethren has an abiding value :

Let love for the country and countrymen, for the People and Soil, be the mould into which our lives flow hot. If we reach this, every thought we think, every word of knowledge gained, will aid in making clearer and clearer the picture. With faith in the Mother, and Bhakti for India, the true interpretation of facts will come to us unsought. We shall see the country as united, where we were told that she was fragmentary. Thinking her united she will actually be so. The universe is the creation of the mind, not matter. And can any force in the world resist a single thought, held with intensity by three hundred millions of people?

Swami Vivekananda, when he was with Nivedita in France in 1900, had blessed Nivedita’s future work by presenting a poem which was also a charge to her of her future mission.

The mother’s heart, the hero’s will

The sweetness of the southern breeze

The sacred charm and strength that dwell On Aryan altars, flaming, free

All these be yours, and many more

No ancient soul could dream before

Be thou to India’s future son

The mistress, servant, friend in one.

Nivedita spent her whole life as an attestation, as it were, of this faith her Master had reposed in her. She carefully nurtured this trust and hoped that she does justice to what he might have expected of her. She expressed this in a letter: “God grant me to speak brave true words in His Name before I die—words with His life flowing through them untainted, unimpaired— that I may see that last confidence shining in His face once more—and go away into eternity, feeling that I have not disappointed him.”

Nivedita’s life was truly an extension of Vivekananda’s own life and mission. An inscription at her cremation-spot in Darjeeling says: “Here Reposes Sister Nivedita Who Gave Her All To India’. Few would ever deserve the description more befittingly.